This fun 2-10 player mini-game features some fun mechanics where you can spawn creepers to pummel, bomb, rocket and grenade your opponents or just blow stuff up. The game takes place inside three large glass rings. All of the structures you see inside the sphere are created by players who've been on the server previously. This mini-game differs from most other mini-games because the world does not reset after each match. Only the starting platforms and rings do. 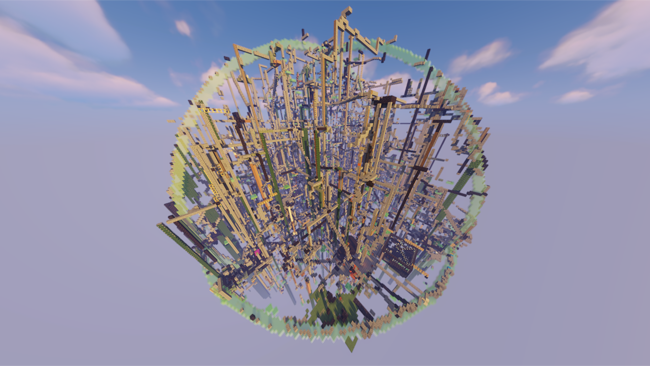 All players are equipped with chainmail boots with blast protection. This is not a melee style combat game so PVP is turned off. Instead you are supposed to utilize the items you get from supply drops. All players will have 30 minutes of Saturation so that health regenerates quickly. Everyone starts with a big collection of assorted blocks so that structures can be built. Use blocks to get closer to your opponents or for building defences. You are allowed to craft items and you are also allowed to store/hide items in chests for subsequent games. There are two main ways to die in this game. Falling to your death and going outside of the sphere (usually from falling).

The game starts when there are at least two players online. The game is won when there is only one player left alive. There is a maximum of 10 players.

When in game, you'll get a supply drop creeper regularly. It falls down slowly and drops items when killed. Be careful the supply drops can explode. When you know a creeper is about to drop, you should not be under any blocks as this will catch the creeper or suffocate it which might cause you to miss out on your loot. Below are the items you could find in the supply drop:

Placing this will launch a rocket with an explosive creeper payload. This is ideal for destroying platforms occupied by opponents who are directly above you. This has an explosion radius of 5 blocks. Creeper Rockets can be spawned from where blue arrows land.

Places a charged creeper. If you walk too close to this creeper it will explode with an explosion radius of 6. The strategy to use with this creeper is to hide it where an unsuspecting opponent will walk near it. The bomb will explode itself or you can detonate it with an arrow. It will glow blue when it is armed.

Places a Pummeler Creeper. This creeper will repeatedly pummel the ground it is standing on until there is nothing else to stand on. Its good for removing columns of block or attacking players below you. Pummeler Creepers can be spawned from where orange arrows land.

Places a Chaser Creeper. This creeper is invincible (except when it explodes) and runs fast. The player who places the egg has 5 seconds to get away. Chaser Creepers can be spawned from where grey arrows land. It has an explosion radius of 6.

This creeper will throw grenades in random directions until it dies. You have 5 seconds to get away from this creeper before it activates.

These can detonate Creeper Bombs or if they hit a block they will spawn an ignited creeper with an explosion radius of 2.

When this arrow hits a block, Bomber Bats will be summoned above the arrows location. The bats will drop bombs in the area for a short time.

Use this to apply the glowing effect to all players. It helps you find players who may be hiding. But it will also reveal your position. The person who uses this egg will imediately face the nearest opponent.

This is one of the items you can use when you are knocked off a structure. As you are falling, face down and throw the egg. It will deploy a 3x3 slime platform for you to bounce safely onto.

Throw this in the direction of your opponent to block thier incomming attacks.

Throw this in the ground where your opponent will walk near it and they will become imprisoned and affected by 10 seconds of mining fatigue.

This is a standard ender pearl which can be used to get you to a better position quickly. It won't save you if you are already falling.

The server is not currenly live. If you would like to host this mini-game. Please get in touch so I can list your server here.

Datapack created by PyroStunts. World created by everyone who's played before you. Contact bimbimma@gmail.com. You can find PyroStunts on discord at PyroStunts#0543

Check out the WCW discord server.

Huge thanks to ChloRadium for the excellent resource pack for this game. You should be promtped to use the resource pack when you join the server. Or you can download it here.

The entire datapack for this game is available on GitHub.